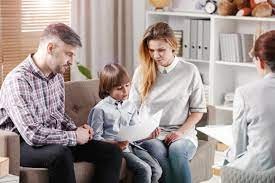 The primary judge made orders for the children to live with the father and he has sole parental responsibility for them.  The mother appeals final parenting orders alleging that she was not afforded procedural fairness.  The Court, in deciding whether or not to grant the appeal, assessed whether it was correct for the judge to not adjourn the proceedings upon the withdrawal of the mother's counsel.

The parties met in 2006 in City N, UK and commenced their cohabitation there in May 2007.  In July 2008 the mother who was then pregnant with X, returned to live in Australia.  The father travelled to Australia, arriving three weeks after the older child’s birth.  The parties finally separated in April 2014.

The parties effectively conceded that they were unable to cooperate with each other in relation to the major issues concerning the children and each party proposed they have sole parental responsibility.  Further proceedings were instituted and on 31 January 2019 orders were made that the older child live with the father and the younger child live with the mother with the children to spend each weekend and every school holiday period together either with the mother or the father.  The parenting orders provided that both children live with the father and he have sole parental responsibility for them.  The primary judge ordered that the children spend time with the mother during school terms as agreed between the parties or if there is no agreement each alternate weekend.

Significant to the primary judge’s conclusion that the children should live with the father and he have sole parental responsibility for them, was the mother’s lack of emotional regulation.  Her Honour concluded that the mother’s apparent inability to contain her emotional response would adversely affect and pose a risk to the children of emotional harm.  By Notice of Appeal filed 7 December 2020, as amended on 6 August 2021,  the mother appeals final parenting orders made by a primary judge.  The mother contends that the primary judge failed to afford the mother procedural fairness during the hearing and, as a result she was significantly prejudiced.  In the event that the appeal was dismissed, counsel for the father sought an order for costs against the mother.

Family Law Act 1975 (Cth) s 102NA - pursuant to which because allegations of family violence had been made by each party against the other and the mother being then without representation, she was provided with the assistance of lawyers to appear for her.

Allesch v Maunz (2000) 203 CLR 172; [2000] HCA 40 - provides that it is a principle of justice that a decision-maker, at least one exercising public power, must ordinarily afford a person whose interests may be adversely affected by a decision an opportunity to present material information and submissions relevant to such a decision before it is made.

Aon Risk Services Australia Ltd v Australian National University (2009) 239 CLR 175; [2009] HCA 27 - held that a decision to adjourn proceedings requires a consideration of matters wider than the interests of the parties but needs to be mindful of the needs of other litigants waiting to be heard, the proper management of court lists and to which must be added in parenting proceedings, the best interests of the children.
M v M (1988) 166 CLR 69; [1988] HCA 68 - provides that proceedings for custody or access are not disputes inter parties in the ordinary sense of that expression.
Mobil Oil Australia Pty Ltd v Commissioner of Taxation (Cth) (1963) 113 CLR 475; [1963] HCA 41 - held that it is important to understand that the requirements of procedural fairness are to be determined by reference to the statutory framework within which a decision-maker exercises a relevant power and the particular content to be given to the requirement to accord procedural fairness will depend upon the facts and circumstances of the particular case.

At all times the father was represented and funded his own legal costs. At the time of the hearing before the primary judge, he had spent some $450,000 on legal fees. The mother had been unrepresented for the most part.  An Independent Children's Lawyer had earlier been appointed and appeared until 2017.  No party had sought the appointment of an Independent Children's Lawyer to participate in the final hearing.  It was asserted that the counsel’s withdrawal from the proceedings should have been reason for the primary judge to adjourn the hearing and in failing to do so denied the mother procedural fairness.

Counsel for the mother in seeking the adjournment relied on three matters: that there had been significant changes in the family’s circumstances since the release of the report of which the family consultant was not aware, had not addressed and which should be the subject of an updated report; the absence of an Independent Children's Lawyer and the volume of documents which comprised the mother’s case.  It was argued that even though the mother told the primary judge she was comfortable in continuing the hearing it could not be assumed that she genuinely understood what she was being asked, given that there had been considerable discussion of various options before the matter was briefly adjourned to allow the mother to consider her position.  Either through the questions asked by the primary judge or by the father’s counsel, all of the updating circumstances referred to by the mother’s counsel in the earlier adjournment application, were put to the consultant and on which she expressed an opinion.  So any concerns of the mother’s prior counsel that updating circumstances were not considered by the consultant, the subsequent cross-examination cured the asserted evidentiary defects.

The Court concluded that there was no denial of procedural fairness.  Appeal NOA 83 of 2020 be dismissed.  Within 28 days of this order, the mother should pay the father’s costs of the appeal fixed in the sum of $24,227.00.