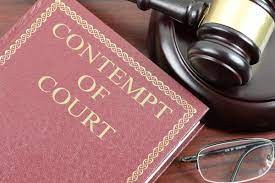 Ms Newett is a party in proceedings in the Family Court of Australia file number BRC2179/2018.  Mr Armstrong is a solicitor working at the firm AZ Lawyers.  AZ Lawyers are the lawyers on the record for Ms Newett’s former husband in the same mentioned Family Court proceedings.  On 9 February 2021, the applicant (Ms Newett) filed an Application for Contempt of Court naming Mr Armstrong as the respondent.  The Court ordered the Contempt application was listed for hearing requiring the personal appearances in Court by the parties and their legal representatives.  The order of 8 June 2021 contemplated personal appearances at the final hearing scheduled for 12 August 2021 but the pandemic intervened.

The mother lives in New South Wales and it would have been practically impossible for her to be present in Queensland for the hearing since the Queensland border is currently closed to residents of New South Wales.  The parties thus appeared at the hearing of the Contempt Application by electronic means using Microsoft Teams.  The respondent contends that many parts of the applicant’s affidavits filed 9 February 2021 and 11 August 2021 contain irrelevant material and are therefore inadmissible.

Whether or not the application must be dismissed for failing to distinctly state the specific charges against the respondent.

Colina, Re; Ex parte Torney[1999] HCA 57; (1999) 200 CLR 386 - Gleeson CJ and Gummow J stated that Section 21 of the Family Law Act creates the Family Court as a superior court of record, s 35 states that it has ‘‘the same power to punish contempts of its power and authority as is possessed by the High Court in respect of contempts of the High Court’’, and the relevant effect of s 112AP is to authorise provisions as to practice and procedure by the rules and to specify the forms of punishment.

Chang Hang Kiu v Piggott (1909) AC 312 - where it was sufficient in that jurisdiction at that time for the "gist of the accusation" to be made clear to the person charged.

Coward v Stapleton[1953] HCA 48; (1953) 90 CLR 573 - the High Court of Australia  stated that it is a well-recognized principle of law that no person ought to be punished for contempt of court unless the specific charge against him be distinctly stated and an opportunity of answering it given to him.

Whisprun Pty Ltd v Dixon [2003] HCA 48; (2003) 200 ALR 447 at [62] - where it was held that it is useful to state that it is not incumbent upon a trial judge to refer to every piece of evidence relied upon by the losing party, or to traverse every argument advanced by them.

Hearn v Street[2008] HCA 36; (2008) 235 CLR 125 - where the High Court was required to consider the notion of an "implied undertaking" said to apply to the use of documents generated or disclosed for the purpose of litigation.

In the Marriage of Gibb [1978] FLC 90 – 405 - held that the applicant and the respondent have leave to file a further brief written submission on the relevance (if any) of the decision.
Oates v Q & Anor[2010] FamCAFC 202 - where it was section 121(9)(b) which provided protection to the person disseminating the information.

Re Pollard [1868] UKLawRpPC 10; (1868) LR 2 PC 106 - recognized the principle of law that no person ought to be punished for contempt of court unless the specific charge against him be distinctly stated and an opportunity of answering it given to him.

Schwarzkopff; Fitzgibbon v Barker(1992) 16 Fam LR 539 - the Full Court stated that, "... Except in special circumstances, it is not desirable that this court should enforce by way of contempt or otherwise the obligations arising under section 121..."
Tate v Tate[2002] FamCA 356; (2002) 29 Fam LR 195 - confirmed that the standard of proof to be applied in contempt proceedings is proof beyond reasonable doubt.

As to the details contained in the first box under the heading "Statement of Alleged Contempt," the applicant has not been sufficiently clear as to precisely when the respondent used the details of the Family Court case.  What has been provided are two possible dates (26 November 2020 and 1 February 2021).  The times stated are 9:00am to 3:00pm on both of those dates and the place is reasonably large – namely Suburb NN.  The applicant has not provided particulars as to what "details" of the relevant Family Court case the respondent used.

Lastly, there were no particulars as to the "serious acts of criminal defamation against the applicant" and as to when, where, or how it is that the respondent criminally defamed the applicant.