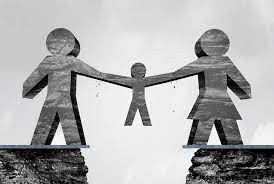 Since 2008, there had been incidents between the mother and father that involved violence.  Some of which are due to the father being suspicious about the mother's infidelity, alcohol intoxication, and more.  Overall, the father's conduct towards the mother post separation has been intimidating.  In December 2015, orders were made for B and C to live with the mother and to spend time with the father in alternate weekends and half the school holidays plus other special occasions.

In late 2017, following an incident in the mother’s home, C went to the father’s house where he has remained living since that time.  Since then, C has only seen his mother on a few occasions, probably numbering under 10.  The father says that it was four, the mother says that it was more than four.  C’s relationship with his mother has been detrimentally affected.  The father undermines the mother's relationship with the child as seen from the text messages sent between C and the father in April 2018 where the father told C that he should “piss in his mum’s pocket” in order to get what he wants.

Whether it is in the best interests of the child for the parties to have joint parental responsibility.

Hulls & Hulls [2015] FamCA 1074 - held that in October 2008 there was a significant incident between the mother and father that led to an Apprehended Domestic Violence Order being taken out against the father and he being charged with assault and intimidation to which he pleaded guilty.

Family Law Act 1975 (Cth) s 60cc - the best interests of the child should be considered in making Court Orders.

When the father gave evidence, he said that the mother had made all of these things up and he still denied the allegations of violence notwithstanding the fact that it appears, from His Honours reasons, that the father pleaded guilty to criminal charges including an assault.  Furthermore, C’s behavioural issues have not been addressed in any appropriate way by the father, notwithstanding the fact that the child has been in his primary care since late 2017.  There is no evidence with the father engaging in any psychological assistance for C, engaging with the school to see how he could best support C or, indeed, engaging with the mother to see how C could best be supported.  If the father is to have the benefit of an order for sole parental responsibility, this will teach C that he can continue to behave poorly and he will still get what he wants.

Given the significant conflict that continues between the parents and the significant undermining of C’s relationship with the mother, the Court concluded that a joint parental responsibility would not be in the child's best interest.  The Court ordered that orders 3, 4, 5 and 6 of the orders made by the Family Court of Australia on 3 December 2015 discharged. The child C, born in 2005 (“the child”) shall live with the Father.  The child shall spend time with the Mother in accordance with his wishes.