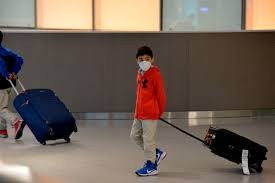 This is a case of the urgent matter at the time where the mother seeks child’s time with father be suspended in circumstances where the child would have to isolate for 14 days upon return to Queensland due to Covid.

These proceedings relate to care arrangements for a young child, X, born in 2006. The parties to the proceedings are X’s parents. X’s Mother is the applicant. The Respondent to this Application is X’s father.

There are existing Orders in place with respect to X’s care arrangements. Those Orders provide for X to live with his Mother in Queensland.  X’s Father lives in New South Wales. Time between X and his Father is to occur one weekend per month (or close to it), and for periods during school holidays. There is also provision for communication by electronic and other means.

The entirety of the greater Sydney metropolitan area is now included within the designated Covid hotspot, such that persons from the Sydney greater metropolitan area or who have visited the area cannot enter Queensland or, if permitted to enter, are required to quarantine or self isolate for 14 days.

The Mother seeks that time for this weekend be suspended. The Father resists that position, and understandably so. Arrangements have been made for this child to board a flight at 5.30pm today - that is, a little under two hours from now. Hence the urgency that is suggested with respect to the case, and explicably and understandably so from the Mother’s perspective when she is already the subject of an Application for Contravention, whether denied or otherwise, with respect to past occasions. It would be remiss of her to not seek to address the current circumstance and to thus leave herself open to further allegations that she has failed to comply with an Order.

The child is scheduled to travel to Sydney this evening to stay with the Father for two nights and to then return to the Mother in Queensland on Sunday. It is an agreed reality that the child will, upon return to Queensland, be required to self-isolate for 14 days.  Thus, he will not be able to leave the home, attend school, or engage in other activities outside of his home save in accordance with public health regulations issued in Queensland.

Issue: Should the child’s time with the father be suspended?

The court is conscious that the Father would feel extremely aggrieved if that time did not occur. There may be financial consequences: tickets that are not refundable, transferable or otherwise.  However, they must, as section 60CA of the Family Law Act requires, bend to the child’s best interests.

The benefit to X of a meaningful relationship with both parents might be achieved, albeit imperfectly and certainly not to the same standard as face to face time, through, in these curious and unpredictable times, increased use of technology – telephone calls, video calls and the like.

There is, in reality, no need to protect the child from physical or psychological harm to exposure to abuse, neglect or family violence, but it is the general disadvantage that will be inflicted upon him, and only him, as a consequence of the requirement to self-quarantine.  It is regrettable that such circumstances have arisen in our nation, let alone the world, but they have.  The Court can only deal with reality, not with ideal arrangements which would see the parents perhaps able to facilitate relationships without such impediments.

For those reasons, the court is satisfied that a case is made out, on an interlocutory basis, for the relief that is sought.

Conclusion: Existing orders regarding the child’s time with the father is hereby suspended.