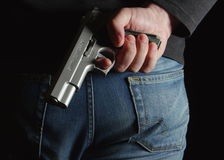 In the interim, the court must resolve what preparations are in the child’s best interests based on an evaluation of the claims pursuant to Section 60CC(2) , Family Law Act 1975 (Cth).

The court was unable to determine as of yet the weight of all the allegations without the necessary documentation of evidence and examination-nevertheless, the police have established sufficient grounds to charge the father- he has previously been convicted of assault occasioning the mother physical harm also weapons and ammunition were discovered. If the rest of the allegations are found to be true against the father, the result will be the father and child’s relationship will cease, in the alternative if the mother is found to be dishonest with her claims the outcome may be she looses custody of the child.

Additionally, the court did not accept the father’s counsel’s submission for supervised contact by the paternal grandparents to alleviate any safety concerns.

It was determined the risk to the mother, and indirectly to the child, is so serious that no supervision, even professional supervision, can be granted.